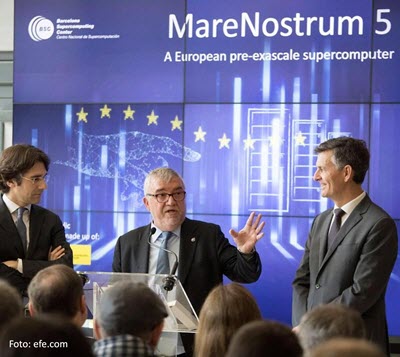 The European Commission has recently given the go-ahead to build and start up the new generation of supercomputers, definitively putting Barcelona among the global supercomputing elite. The Barcelona Supercomputing Center (BSC) will be home to one of the next three large supercomputers of the latest generation with which Europe hopes to compete on a global level with the United States, Japan and China. Barcelona, Bologna and Kajaani (Finland) will be the cities hosting the new facilities, which will be the most powerful on the continent.

The new machine will be called MareNostrum 5, with peak performance of 200 petaflops, meaning 200 quadrillion mathematical operations per second, making it 18-20 times more powerful than the current MareNostrum 4. Currently, there is only one comparable supercomputer in the world: the IBM Summit, located at the Oak Ridge National Laboratory in the United States, which is now accredited as the most powerful supercomputer in the world, beating out its Chinese and Japanese competitors.

The initial budget for the new supercomputer will be roughly €200 million, with 50% of the investment from the European Union (the largest investment the EU has ever made in Spain) and the rest from the Ministry of Science, Innovation and Universities and the Catalan Government, with contributions from Portugal, Turkey, Croatia and Ireland. EuroHPC, the body that is promoting European high-performance supercomputing, highlights that the Barcelona project strives to make Europe the most important supercomputing region in the world.

Globally, a total of €840 million will be invested in the new facilities (the three mentioned above plus five more with smaller facilities in Bulgaria, Czechia, Luxembourg, Portugal and Slovenia), which will promote development of applications for personalised medicine, designing drugs and new materials, biotechnology, weather forecasts and climate change estimations. The supercomputers are expected to be operational by the second half of 2020 for European users, mainly, in the academic, industrial and public sectors.

BSC notes that Barcelona is part of the new European road map and the Catalan government believes that choosing Barcelona to host one of the three high-performance computing centres ensures that Catalonia will have a place of leadership in Europe in the field of supercomputing.