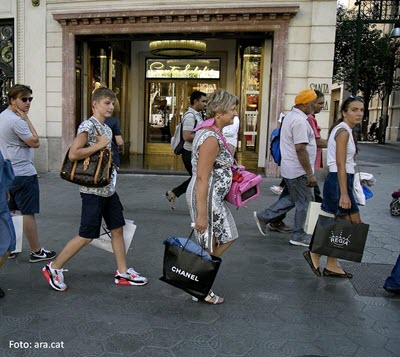 According to a survey undertaken by  Egatur, which was recently released by the National Institute for Statistics , international tourist spending in Catalonia in September 2017 was 2,168 million euros, 6.3% more with respect to the same period last year.

During the total period from January to September de 2017, foreign tourists spent 15,799 million euros in Catalonia, 12.2% more than during the same period in 2016. In this regard, Catalonia is the Spanish region with greater tourist expenditure in September, as it represents 22.6% of the total, followed by the Balearic Islands (18.6%) and the Canary Islands (17.5%).

These figures show that Catalonia is not only a major international tourism destination in the Mediterranean region, but is now a world leader in this sector. Tourism is in fact one of the most important economic sectors in the country, as it represents 12 percent of GDP and is responsible for over 350,000 jobs. Catalonia is divided into 9 tourism brands. The Barcelona brand accounts for the largest amount of tourist demand, followed by the Costa Brava, the Costa Daurada and the Costa de Barcelona.