Foreign tourist spending in Catalonia has grown by 14 % and accounts for 22.4 % of the total for Spain 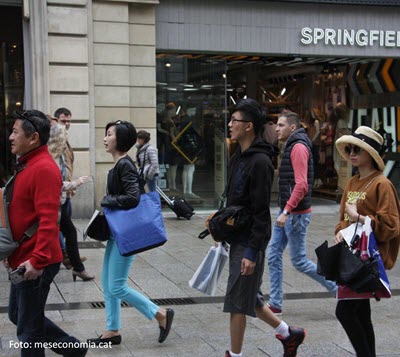 Catalonia received 10 % more tourists during the first quarter of the year, a figure of 8.6 million visitors. The region also led rankings in terms of international tourists in Spain, according to data from  Frontur, published by the Ministry of Tourism.

Furthermore, in the first seven months of 2017, Catalonia received 10,991 million euros in terms of international tourist spending figures, which represents an annual growth of 14.0 %. Catalonia accounted for 22.4 % of tourist spending in Spain between January and July. This data was published by the Spanish National Institute for Statistics (INE) using the Survey on Tourist Spending (Egatur).

The average per-tourist expenditure stood at 1,099 euros in July, which represents a growth of 4.8 % with respect to the same period last year, while average daily expenditure reached 158 euros, the equivalent to an increase of a 3.8 % yearly increase. The average length of tourist visits was 7.0 days; an increase of 1 % in annual terms.

Tourism plays an important role in the Catalan economy, given that it represents some 12 % of the region’s GDP. The main source markets for foreign tourism in Catalonia are: France (28.7 %), the United Kingdom (10.6 %), Germany (7.5 %), Italy (7.1 %) and Russia (3.1 %). Approximately 80 % of foreign visits to Catalonia are made for leisure and vacations; 10 %, for work, businesses, trade fairs and conferences, and the remaining 10 % for other reasons.