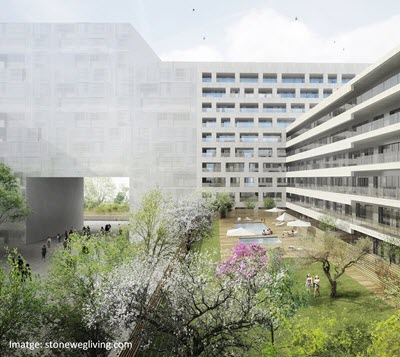 Swiss real estate investment fund Stoneweg opened offices in Barcelona in April to control its investments in the Catalan market. The platform expects to invest €750 million in developments nationwide over the coming years. Of this amount, roughly €180 million has been committed to developments in Catalonia. The fund expects to acquire properties from banks, Sareb and private owners.

Stoneweg explains the fund has 30 residential developments open around Spain. A good number of these are in the Barcelona area, where it is building 350 housing units through various projects with local developers. In La Sagrera, for example, the fund will break ground this summer on a 12,000 m² building with 104 housing units with development group Castellví. The project will be just 100 meters from the future train station and has a budget of €35 million.

Furthermore, Amazon will be setting up its SME support center in a 11,000-m² building in Barcelona. The Castellví real estate group and the Stoneweg and 1810 Capital Investments funds have recently confirmed that a fifteen-year lease has been signed for the Luxa Silver building in the 22@ technology district. This is the biggest real estate operation in Catalonia in the past ten years.

Catalonia saw €2.5 billion in real estate investment last year, up 26% from the previous year for an all-time record. These operations mainly involved the purchase of office buildings and shopping centers (more than €1.6 billion). However, real estate investment in the industrial and logistics sector, at €144 million, posted the highest growth at 61%.