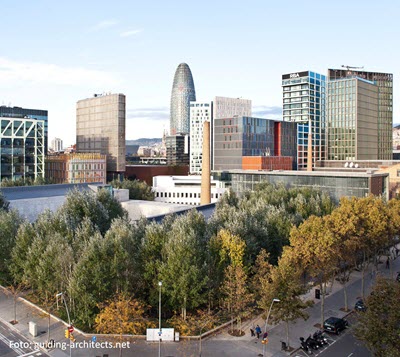 Luxembourg fund Shaftesbury continues to invest in the Barcelona real estate market. On their first incursion into the office market in the 22@ district, the fund purchased a plot of land on Carrer Cristòbal de Moura where it will erect an office building with 16,500 m2 of floor space. Sources close to the operation say it was worth roughly €10 million. The plot is located near Parc del Centre del Poblenou and the Pere IV axis, where Cisco is expected to set up a smart city research center.

At the same time, Shaftesbury is also developing a luxury residential project on Avinguda Diagonal, across from the Telefónica headquarters. This project was started ten years ago but put on hold. The building, initially to be used as office space, will be luxury homes with 89 apartments, 2 retail spaces and 155 parking spots in a total of 30,000 m2. It must be noted that Shaftesbury completed the third largest hotel investment in Spain, purchasing Hotel Pullman Barcelona Skipper for €93 million from AXA Investment Managers.

22@ is one of the fastest-growing areas in the city of Barcelona and, in this regard, is also home to other projects like Luxa de Castellví with the Stoneweg and Global Danbury funds, near the Agbar tower (17,000 m2); the complex being developed by Barcelonesa de Inmuebles on Carrer Llacuna (23,000 m2); and the project Colonial has underway on Carrer Ciutat de Granada, near Plaça de les Glòries (24,000 m2), with an investment of €77 million.

All of these buildings, which will be finished in 2018 and 2019, will increase the office space on offer in Barcelona and cover unmet demand. In this regard, most have broken ground with signed pre-leases, including Colonial, which has already ensured 40% of the surface area will be occupied by Schibsted.